Parents play a crucial role supporting the education of our children

November 11th, 2019 was a busy Thursday morning in the Loreto Primary School. Children were in classes and alternatively playing in their playfields. 351 parents came to attend the parents’ day and discuss the progress and needs of learners. Some walked while others cycled from their various homes to reach the school.

Gathered under a large tree shade, different speakers spoke words of encouragement to parents, urging them to instil good values in children and be role models to them. Parents were advised to avoid burdening children with many home chores. Instead, they were reminded to always encourage students to keep working hard by providing an ample study time and a conducive environment. Additionally, teachers and various speakers urged parents to appreciate their children and inspire them by giving them gifts, which are great motivators to learners’ performance.

Loreto primary serves over a thousand pupils and has improved the condition of learners’ education in Maker Kuei. Now, children have a safe place to learn from and the meeting was a platform for parents to register their appreciation.

One of the parent representatives thanked the school director, Sr Orla for the work she has done in Maker Kuei. He explained, “We appreciate Sr Orla for bringing this school. Before, men cared for pupils and children in the cattle camp as women cared for children in towns near schools. Today, children can come to school and teachers guide and observe them in classes, encouraging them to study hard.”

Sr Kathleen who had visited the school for some weeks encouraged the parents, noting that in a short time the school has done much. Kathleen served as the Principal in the Loreto Primary between 2012 and 2014, and students were all learning under the trees then. She reminded the parents to put emphasis in girl child education as they educate boys too, and resist from marrying girls at an early age.

She noted clearly to parents that educating their girls will enable them give much as many benefits as they can in future. Sr Orla emphasized by encouraging parents to support the school to continue educating children and reminding parents to avoid forcefully marrying their daughters at an early age.

Different speakers continued to give seeds of wisdom. Fr John stirred parents to send their children to school to study so as to reap the fruits of education. He demonstrated more by telling of a story about a farmer who did not prepare his farm in time. “When the farmer realized he had not prepared his farm in time, he promised his sons of a treasure in the farm and they dug it all in search of it, after which they planted and later enjoyed the yields.”

Fr John related the situation to the current condition in Maker Kuei and South Sudan, that parents’ living conditions will be better in future if they send their children to school to study, because it’s only in school where they will find that precious gift of education.

Parents play a crucial role in the bringing up of every child. In this meeting, four men and women were elected as members of the Parents Teachers Association (PTA). To strengthen the parent-teachers association, parents were briefed on rules and frequency of meetings.

After graduation ceremony held on 22nd November the PTA members addressed pupils and reminded them to behave well within and out of the school. PTA members informed pupils that they will take responsibility if they get them misbehaving out of school. 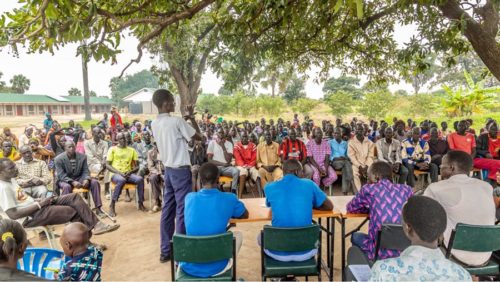 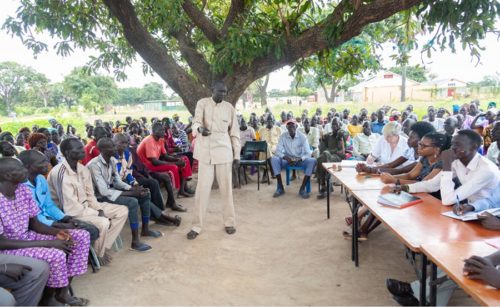 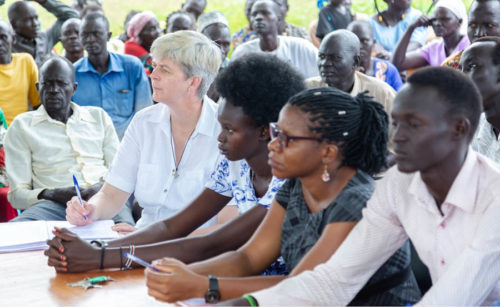