On Thursday, March 7, the US Secretary of State hosted the 2019 International Women of Courage (IWOC) Awards at the U.S. Department of State to honor 10 extraordinary women from around the world. This year, our very own Sr. Orla Treacy was nominated and selected for this prestigious award.

Today, I was very aware of our girls as I was receiving the award. I pray that I am paving the way for them. My hope and dream is to see one of them with this award in the future.”

She was nominated by Callista Gingrich, Ambassador to the Holy See, on a recommendation from the De La Salle Brothers whom recently started a school in our community. During the ceremony, Naw K’nyaw Paw of Burma, spoke on behalf of all the women being awarded, telling her story of courage, and ending with a poem which reflected on the fact that women of courage prepare the way for others to be brave and to fight for a better world.

When asked about the award, Sr. Orla said, “This award belongs to the young women of South Sudan with whom I have the privilege of working. Our students embody all that is courageous – they are young women of vision, strength and hope. Young women who dream of a better country for themselves and their families, who are prepared to challenge old structures and work towards making South Sudan great. I am grateful to all who have made this possible.

Our work in South Sudan is not possible without the ongoing support of our partners, our wider Loreto family, past pupils, students, staff and our local community in Rumbek. Our Church leaders, community leaders and local government leaders have all played a significant role in supporting our mission.” 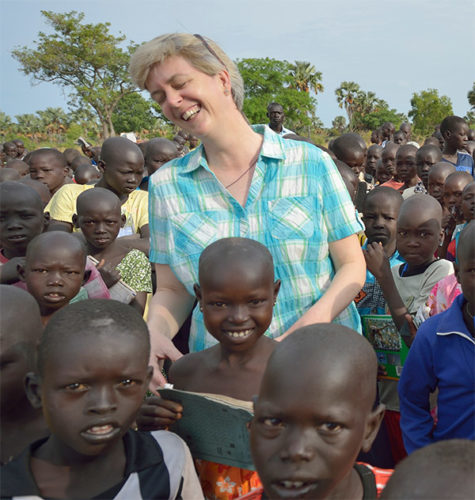 In 2006, Sister Orla joined other Loreto Sisters who were starting a new mission in Rumbek, South Sudan. Touched by the plight of girls who were being forced into early marriage and denied the right to an education, she took action. Sister Orla and the Loreto Sisters started a girls-only boarding school with 35 students.

Today, Sister Orla serves as the head administrator of the Loreto Rumbek Mission in Maker Kuei. The Loreto Rumbek Mission consists of 3 core programs: a community based co-educational school with nearly 1,200 children, an all-girls secondary boarding school with around 300 girls, and a women and child-centric Primary Health Care Unit (PHCU) which provides around 1,600 clinical consultations each month.

The mission is currently supported by 2 additional sisters – Sr. Penina from Kenya and Sr. Baida from India.

After receiving the award, Sr. Orla expressed her hope for the girls at Loreto,
“Today, I was very aware of our girls as I was receiving the award. I pray that I am paving the way for them. My hope and dream is to see one of them with this award in the future.” 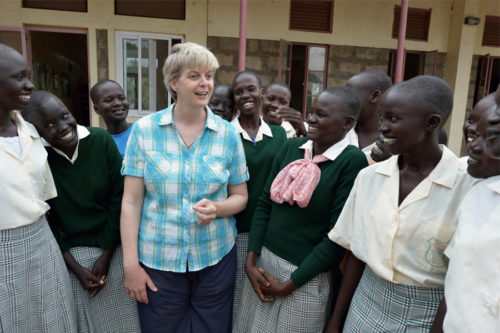 She added, “I spoke with one of our former students this morning and I shared my hope that a South Sudanese young woman would have the honor of receiving this award one day.”

Her father noted, “I was very privileged to be present and I am very proud as a father,” while her brother spoke of how proud their mother would have been to see Sr. Orla honored in this way.

Sr. Anne Mary, who previously served in the Loreto Rumbek mission spoke of the impact of the ceremony. “I was really moved to see so many women from all over the world – from so many cultures being honored. What really struck me was the fact that these women were representing the many other women who work hard serving the vulnerable. I was also thinking of our girls in South Sudan who are setting out to do something great – preparing to work hard for their country,” she explained.

Here in Rumbek, our students and staff were overjoyed to hear news of the award and shared some of their reactions.

Reaction from students and staff

“Sr. Orla has done marvelous works in Rumbek, when we started we were reading from under trees but now we have our own classes. We read from a safe place. We have become more knowledgeable. The school provides meals which are essential for sustaining kids in school.”
– Regina, Loreto Primary School Head Girl

“Sr. Orla Treacy has chosen to be part of our lives and it’s such a big opportunity for South Sudanese young women who take us as their role models out there. With her motherly nature and having the girls’ interest at heart, she has all along strived to give the best quality academic resources in pursuit to offer the best to the girls. In a poor society, many girls have had the opportunity to access quality education.

Sister’s support has been crucial in intervening for young girls who face threats of forced marriages by offering social support and providing a safe haven in school. Talking of health, the facilities are better and free and this has maintained good health for us all.”
– Christine, Loreto Girls Secondary School Head Girl

I count on Sr. Orla because of her support before I achieved my career and I’m now giving back to the school and the larger society. I have been always impressed by her responsibility and accountability to see everything in the right place. To give the best even in harsh conditions. Her selfless heart full of humanity to promote human rights and make life better for all.”
– Victoria Piath, Loreto graduate and nurse in LPHCU

Sister Orla Treacy of #Ireland is being honored for her noble efforts to address the plight of girls in Rumbek, #SouthSudan, her commitment to provide schools for girls being forced into early marriage and denied an education, and her compassion for teaching. #WomenofCourage pic.twitter.com/bLfWUa8LJF